Liam Gallagher released his first solo album last year (2017) in October titled “As You Were”. It debuted at number 1 in the UK, earned gold certification in the first week and sold 16,000 in vinyl sales in its first week meaning it was the highest in 20 years. This isn’t going to be an album review but I must say that the album rocked my socks off and I am more than satisfied with the album. Liam Gallagher toured in 2017 and is continuing to do so in 2018. I saw him on the first Friday of the year and Liam definitely delivered the Friday feeling!

I made the last minute decision to go to the gig the day before because my heart and soul wanted to go but my brain was telling me to save the money. I trusted my heart and soul and I’m glad I did. When I go to a gig nothing else matters. Life is put on hold for the duration of the gig. It’s a great break from the hard times. So yes, Liam Gallagher was worth the money!

I’m no stranger when it comes to mosh pits but you can never fully prepare yourself for a wild one, this one was no exception. You can often tell what the atmosphere is going to be like from the performer, the music and the people around you. I was in the third row and surrounded by men my age (early 20s) so that was a hint as well as the fact that we were going to see a Gallagher! You’re safe if you’re in the front row because you can hold onto the barrier to hold your place plus you’re closer to the stage. The warm up music in the background before Liam came on stage really worked for the fans. I remember when The Jam’s “Town Called Malice” came on and everyone sang along, same with the Stone Roses’ song “Resurrection”.

Finally, Liam Gallagher walked on stage in true Liam Gallagher style. “Rock ‘n’ Roll Star” fired the crowd up and the place went made, which is no surprise because it’s the first song and it’s an Oasis song. It became quite a pattern because people only went crazy when it was an Oasis song but when Liam played his own songs from the album “As You Were” everyone settled down. I was pleased with the pattern to be honest because a mosh pit feels like a battle at times so it was nice to enjoy his songs without feeling like I was going to die from exhaustion. I could look at him and appreciate him being there, take footage from my phone and be in the moment.

Sorry to sound so cliché but one of my favourite Oasis song is “Live Forever” and it was a brilliant feeling to hear it live with the crowd of people I was with in the mosh pit. It felt like it was just me and Liam Gallagher Vs the world. Us and them. Those moments are special. It was an acoustic version of “Live Forever” as well so you could really hear the fans singing (shouting) the song which was great because one of the best things about going to a gig is singing along with strangers. Music brings people together and Liam certainly provided the music that night.

After “Live Forever” Liam left the stage meaning that we (the fans) had the duty to chant for him to come back and perform more songs. The “Liam!” chant would last 10 seconds before it died off and then someone would have to start the chant again. I started the “Liam!” chant twice which is always a buzz. Finally, Liam entered the stage again and the atmosphere was crazy just like the first time he came on stage. “Cigarettes & Alcohol” started playing and I knew that the guy behind me would be ecstatic because he was shouting for Liam to play the song all night long! The pushing and shoving started in the mosh pit again. The woman in front of me didn’t enjoy it, she kept looking back at me and pushing me back but little did she know that she was making it worse for herself because as I went back I was pushed back into her harder than before. She looked like she was going to kick my head in but hey, it’s a mosh pit what do you expect? Liam left the night with the classic “Wonderwall”. It’s a great song but usually when someone plays “Wonderwall” I think, “how cliché” but a Gallagher was singing it so of course it was better. Liam got the drunk crowd to sing it and it was great to be part of it. Bringing drunk people together!

After Liam left there was a “We just saw Liam Gallagher!” vibe in the air. The Sex Pistols cover of “My Way” started playing and a lot of people were either dazed or celebrating. It took some time for my best friend Monica and I to comprehend what we just experienced and to figure out how to walk again with aching bodies. We were covered in sweat (Our’s and probably other people’s), our hair was a mess and our bodies ached but the amazement of seeing Liam Gallagher topped it all. There was plastic cups, spilt beer and my broken sunglasses that I dropped during the gig on the ground. 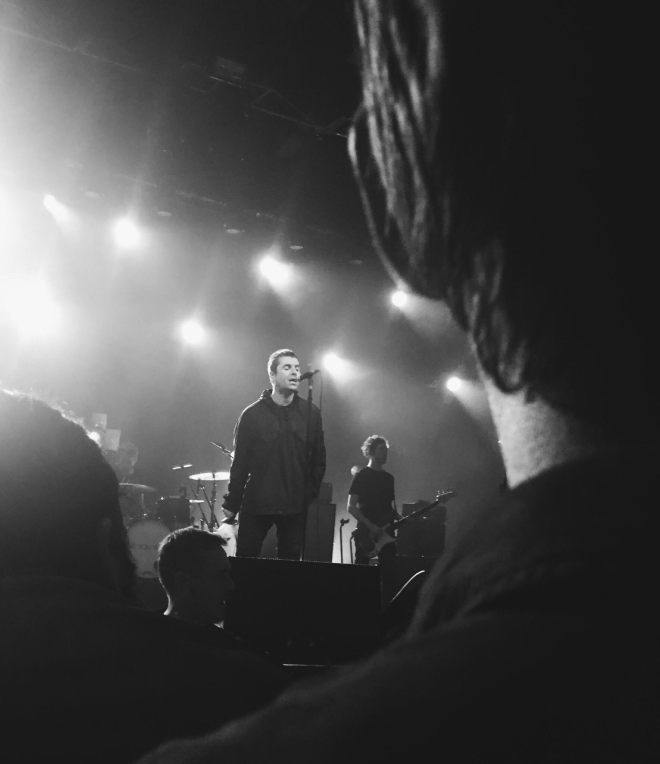 I was still buzzing 3 days after the gig but I still haven’t experienced the post gig depression. Writing about the gig has made me love Liam Gallagher even more. If he plays in your city, you have to go! Listen to his album “As You Were”, you won’t be disappointed. Please comment down below if you’re a fan of Liam and share your stories, I’d love to read them.