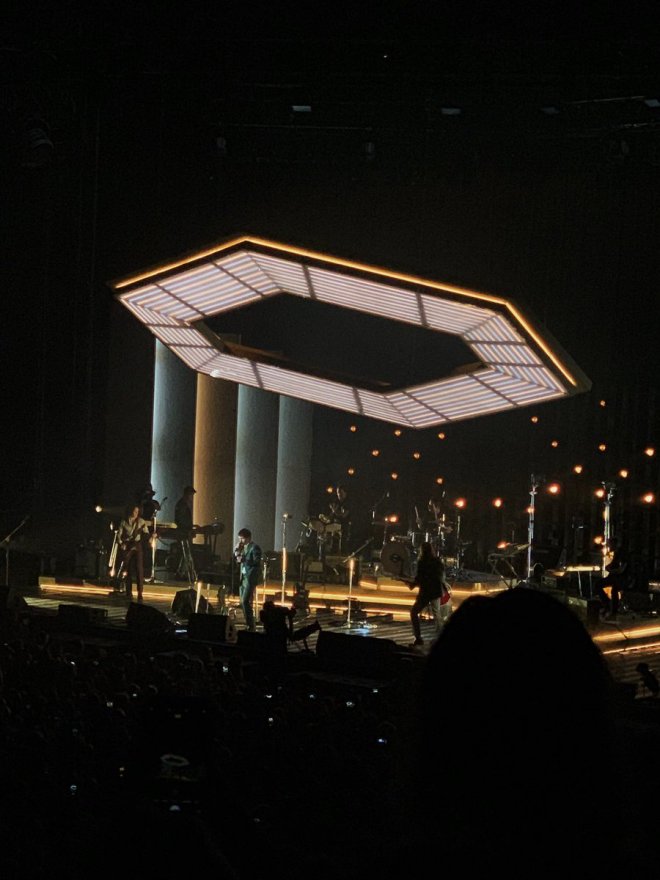 The Sheffield rock band are back in Australia since AM, five years ago. They return on our shores after the release of their sixth studio album Tranquility Base Hotel & Casino. The album shocked some of their long time fans with their new sound and style leading the concert goers with one question in mind “will their live show make up for it?”

Concert goers start their final week of summer with Arctic Monkeys at Rod Laver Arena on a Tuesday for the first of the two Melbourne shows. Some are young, some are middle aged and they are here to have a memorable time.

It’s a sold-out event so Rod Laver Arena is slowly on it’s way to getting jam packed.  Mini Mansions walk the stage. Buddy Holly’s Everyday is a calming start for the Californian band but halfway through the song the calmness cut to the boisterous sound of heavy psychedelic pop. Suddenly, during one of their songs Mirror Mountain Arctic Monkeys’ drummer Matt Helders discreetly joins the band in a drumming spectacular giving the audience a surprise treat!

The arena darkens and the stage lights up as Arctic Monkeys and 4 additional members grace the stage. The excitement is heightened as the band play their first single from Tranquility Base Hotel & Casino, released last year with some mixed reviews. It’s a great song to start the night with as it sets the tone of where they are currently as a band.

The set up is aesthetically pleasing as it resembled the TBH&C album cover and their vision of the lounge in the fictional lunar hotel with a hexagonal lighting frame lit up above the stage and only moves down closer to the band for every song from TBH&C. There’s also two large screens next to the stage featuring grainy live footage of what’s happening on stage and giving the audience an outer space vibe.

Brianstorm is welcomed with great delight of nostaglia for many fans in the arena and the extended drum solo hypes the crowd up. Crying Lightning is another highlight that has the fans singing along and the thudding bass riff. The slick indie rock song Arabella rocks the atmosphere following by another TBH&C song One Point Perspective. The energy disappears and some people are on their phones, leaving to get more beer or sitting down resting their legs. However, some fans are genuinely liking the new sound. But it doesn’t take too long for people to perk up for Dancing Shoes.

Cornerstone evokes a lovesick feeling in the atmosphere that encourages everyone to bring out their phone torches to light up the arena, and a few glimpses of matches before they blow out. It’s a really sweet moment and one of the highpoints of the night.

“Classic!” a fan exclaims as 505 starts playing. As the intensity of Alex Turner’s voice, lyrics and melody progresses faster the crowd’s exhilaration grows. The emotion around the room is obviously shown through the passion in the movements of people’s bodies as they let the song release their sensations of the night.

The heavy duty guitar song Don’t Sit Down ‘Cause I’ve Moved Your Chair is a great crowd pleaser with the “yeah-yeah-yeahs” in the chorus. Following with Do I Wanna Know and the guitar riff that seduces the many souls around the arena. Pretty Visitors comes after with it’s haunting chorus and Helder’s drum solo with the red lights really sets the soul-stirring mood. Turner finally shows some quirky interaction with the crowd by leaning over his keyboard and points at the fans in a drunkenly manner. There isn’t a lot of interaction between the band and the crowd and at times it does seem like Turner isn’t feeling the vibes of the atmosphere but the audience definitely feels it to the max.

The fast paced I Bet You Look Good on the Dancefloor prompts the wild crowd some more. The punk beats and stand out drums along with the crowd shouting the lyrics like there’s no tomorrow is full of adrenaline.

The encore starts with a golden cube slowly coming down for Star Treatment. It’s a slow way to start the encore songs and features lights swaying from people’s phone torches which continues through to No. 1 Party Anthem with couples holding onto each other and feeling all loved up.

The final song of the night R U Mine electrifies the arena. The “MONKEYS” sign finally shines which seemed like a waste to use it for one song. Fans hold on to the last few minutes with the Yorkshire band with pure rock rhythms and thrilling guitars. The song finishes and Turner slowly starts singing “She’s a silver lining lone ranger riding through an open space” and the band starts playing again leaving the audience over the moon. What an ending!

Overall, the fans were glad that they stayed with the band because it was an easy flight and the night was well reviewed with more than four stars out of five!