Men and women of all ages gather around in Festival Hall on Easter Sunday to see the godfather of punk, Iggy Pop and to celebrate his 72nd birthday with the legend himself. The people in the pit are preparing themselves for the chaos to begin with lots of conversations about punk and lots of beer.

Sunshine Coast punk rockers The Chats start the night with their pub banter songs like Pub Feed, Smoko and Bus Money. Their Aussie humour creates laughter within the crowd and some old fellas are nodding to the music with smirks as this is possibly the first time they’re being introduced to the young trio.

The red-headed mullet bassist and vocalist Eamon Sandwith addresses the crowd and says “you guys are probably thinking ‘why the fuck are they supporting Iggy Pop?’” but from the faces and atmosphere around the venue, everyone is glad they’re warming the crowd up.

After waiting a while for Pop to enter the stage the lights go down and intense, haunting music excites the crowd. The sound of wild dogs appears and everyone knows that we’re going to be welcomed with the Stooges classic I Wanna Be Your Dog. The cool riff starts and the punk legend runs on stage creating a frenzy within the crowd.

His six-piece band are killing it on stage including the two-piece horn section as they play the song The Passenger. Pop makes sure that everyone here tonight can see him and his wrinkly bare chest, waving and smiling. The crowd sing along, jumping up and down with their arms in the air as they sing “la la la la la la la la.”

Lust for Life starts and the crowd go wild! “Here comes Johnny Yen again with the liquor and drugs and the flesh machine he’s gonna do another striptease” The pit is full of sweat and ecstatic moshing. Definitely one of the highlights of the night. 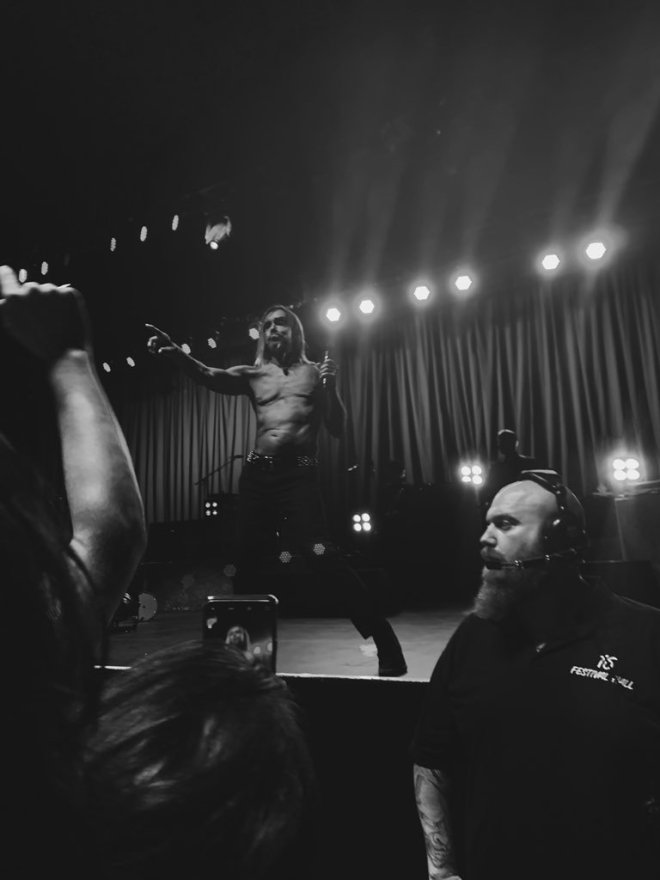 Throughout the night Pop can be seen jumping down from the stage to be with his fans in the pit, walking and dancing up and down the stage in true Iggy Pop style, beating his chest, humping the speakers, playing with his mic, putting his mic in his pants, swinging on the cords connected to the speakers which are connected to the ceiling possibly creating dangerous chaos but hey, that’s punk! He constantly has the security guards on edge as they constantly look at each other thinking what’s he doing now? Who knows but the 72-year-old certainly has a few tricks up his sleeves!

The fans can be seen pushing to see a glimpse of Pop as he again jumps down from the stage to interact with his fans during Search and Destroy. A young man is holding up an A4 sized paper with a birthday note for Pop but sadly it’s not noticed.

Pop does a cover of his good friend David Bowie’s The Jean Genie and everyone instantly sings along knowing the friendship they had and how integral Bowie was in Pop’s musical career and personal life. It’s also a good reminder that Pop has remarkably survived sex, drugs and rock n roll.

The man everyone’s here to see invites everyone to join him on stage for the song No Fun and what a scene of madness! Fans from the tight pit try jumping over the barrier only to get caught by the security guards and chucked away from the stage. They weren’t having any of it! They were declining the birthday boy’s wishes but Pop keeps insisting people to try their best to join him. Luckily a few desperately escape the security guards and jump on stage and had the time of their lives. It’s a real joy watching them and entertaining to watch the fans trying to squirm their way out of the security guards’ arms. At the end of the song the problem was trying to get them off the stage when they want to stay with Pop so the crew and security guards take them away including Henry Rollins who is caught by a fan who wants to take a selfie with him. Rollins obliges but quickly runs off stage as the wildness is taking place.

Pop walks away for a brief second and comes back wearing a cape and turns around and shows the fans the back of his cape featuring a leopard’s head from his iconic leopard head jacket worn by the man himself on the back of 1973’s Raw Power. As he walks to the mic stand to prepare for Nightclubbing his band including another quick appearance of Rollins start singing “Happy birthday to you…” rainbow confetti fall from the ceiling and Pop is laughing and grinning ear-to-ear giving everyone the finger in a jokingly manner and says “you’re making me so happy”. A special moment not only for Pop but for the fans as well.

Sixteen shows Pop singing “I love you” to his fans with real passion and love. He genuinely loves his fans and it clearly shows throughout the night and the crowd love him too! He’s giving it his all and the fans know it.

Pop’s true punk form comes out again during Real Wild Child (Wild One) as he chucks his mic at the ground following by his mic stand. The security guard’s head was an inch away from the mic as Pop threw it again and the guard shouts “Shit!” and laughs in shock. He’s the godfather of punk, what do you expect? Do your homework.

For the encore Down On the Street lightens up the crowd as they are aware the night is coming to an end soon. The adrenaline within the crowd as been strong throughout the night and people are escaping the pit as it’s a bit too much for them, however the survivors stay to saviour the last few minutes with the punk icon who delights the crowd with his cover of Red Right Hand by Nick Cave & The Bad Seeds. The stage turns red and Pop jumps down to the crowd to interact with them one last time.

Everyone in the pit reaches over to have a quick touch of the legend. He leaves and everyone is in complete awe and walking around to find movements in their legs. A fan is talking as he relieves his body with water at the bar “He’s unreal. He’s like part alien or something… 72! Incredible” Yes, Iggy Pop truly is incredible. He has Raw Power!