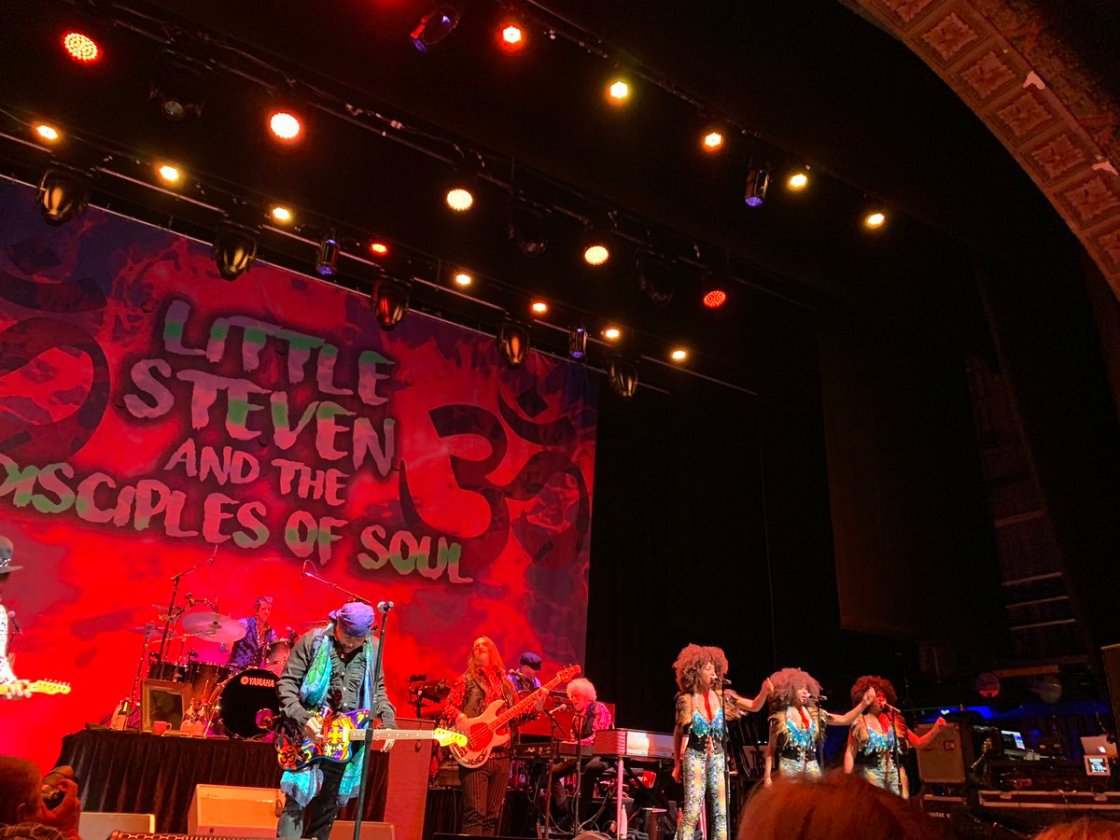 Little Steven and the Disciples of Soul @ The Forum

It’s Tuesday night and people are waiting for the doors to open so they can dive into soul music with Little Steven and the Disciples of Soul. Many of the people waiting are catching up with friends they’ve made due to their love for Bruce Springsteen and the E Street Band. It’s a reunion for some and a chance to have fun on a Tuesday night for others.

The Forum is a beautiful venue with old architecture and features that gives the fans a chance to look around at the detailing of the architecture as they wait for the band to enter the stage. People are piling in and the atmosphere’s excitement heightens as the lights go down and the curtain goes up. The colour of the stage hits the eyes of the audience with and explosion of colour and there’s so much to take in! The fifteen-piece-band starts the music to Arthur Conley’s Sweet Soul Music as Little Steven walks the stage wearing a black long coat, a blue bandana, a blue scarf and a big smile.

It’s hard to look away from the back up singers Jessie Wagner, Sara Devine and Tania Jones as they were dressed in blue sequined tops with brown feathers and beautiful big hair that moves as they dance to the music. They make the stage glow as they grace the stage with their beauty.

Lyin’ in a Bed of Fire from the 1982 album Men Without Women suits the set impeccably, in fact the whole album would. Again the girls killed it with their harmonies during the chorus and the band genuinely looks like they’re having fun which transcends onto the audience creating a joyful vibe in the room.

Until the Good Is Gone is another highlight as the crowd is encouraged by the band to sing along “Yeah, Yeah, Yeah” arms are in the air and the energy is alive. Under the Gun starts with different sounds just like the recording of the song. Van Zandt starts the guitar riff and sings into the mic “In the eleventh hour…” Later on in the song the frontman walks across the stage playing his guitar with raw passion just like he usually does, eyes closed and letting his guitar spill the magic onto the stage.

Down and Out in New York City is a James Brown cover but the band certainly made it their own. The horn section came out one by one to the edge of the stage and showed their talents including Clark Gayton, Stan Harrison, Ron Tooley and Eddie Manion. It’s mesmerising to watch, even Little Steven’s watching from the side probably thinking ‘how brilliant are we’ which they all are. With a band of that size of course you have to show all their individual talents, it’s a crime if you don’t. The song went for so long and so much was happening that everyone in the crowd stood in complete awe of the band’s dynamics. Little Steven knows how to lead a band!

Guitarist Marc Ribler is really nailing it on the guitar and is constantly seen on the edge of the stage showing the fans his gift. Anthony Almonte, the percussionist is on the left side of the stage with his wide grin and fun spirit. Rich Mercurio can be seen hitting the drums like there’s no tomorrow. Jack Daley on bass supporting the band with his stellar rhythmic ways.

Some of the band members take a break and some stay as they play Princess of Little Italy. Andy Burton comes out from his organ with an accordion and Lowell Levinger who goes by the name Banana comes out from his keyboards with a mandolin and is praised for his work in the Youngbloods Van Zandt encourages the crowd to sing along to the well known song Youngbloods song Get Together. The Italian sounds fills the room up and it feels like we’re in the Italian country side taking in the view all though we’re on the opposite side of the planet. It’s great how music can immediately ignite your imagination and you’re taken away from reality. It feels like that right now. It’s pure bliss.

The band gives the fans a little glimpse of their upcoming album Summer of Sorcery with songs Love Again and Superfly Terraplane. Again, the energy is on fire, both in the crowd and on stage. This tour Soulfire is coming to an end as he starts his new tour for his new upcoming album which comes out 3 May, 2019.

The night keeps getting better and better! Nobody wants it to end so the next song I Don’t Want to Go Home is very fitting. It’s a Southside Johnny & The Asbury Jukes song and Little Steven mentioned that Southside Johnny hasn’t toured here yet as he crosses his head and he says he’ll tell him he needs to tour here. The crowd cheers in hope that Southside Johnny takes it on board.

Bitter Fruit is another highlight. The 80s song gets everyone moving and singling along “na na na na na na” the band are really enjoying themselves on stage and Little Steven is having the time of his life. What a joy it must be for him to see everyone loving his music and in Australia! He definitely has a following here and it shows tonight.

Forever starts with the angel like voices of the girls. The song is another favourite from Men Without Women. “if I give you my heart would you love me forever, would you pick up the pieces if I stumble and fall. If my world falls apart could you keep it together, if I can’t have you I don’t want no one at all”

It’s encore time! What’s a better way to start an encore in Australia than a song by an Aussie legend? Ride the Night Away is a song that every Australian knows or should know because it’s a Jimmy Barnes song co-written with the man of the hour, Little Steven. 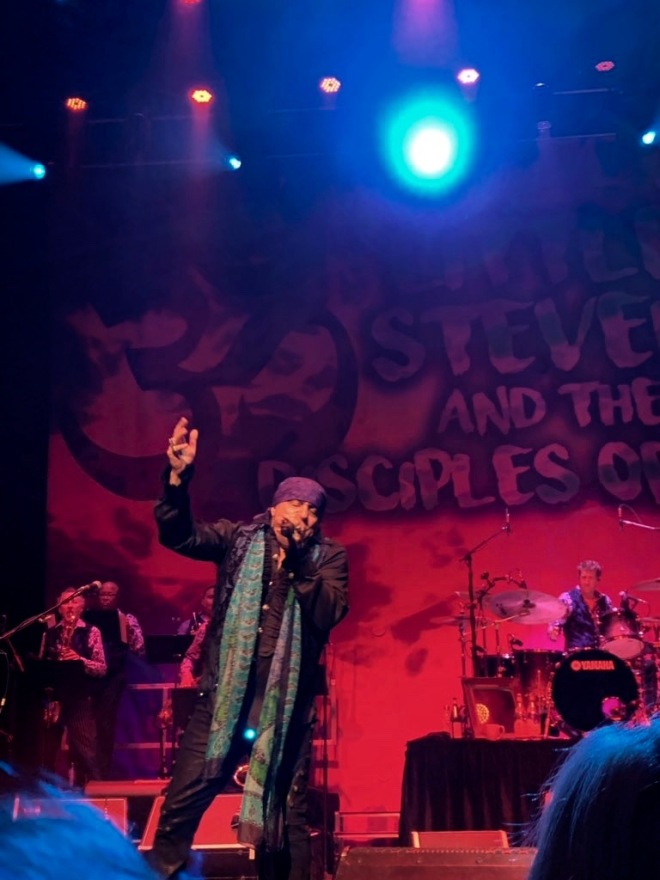 Next up, Sun City. Van Zandt mentioned earlier that tonight will be a politics free zone which is definitely what the world needs right now but this song is too great not to play! The Artists United Against Apartheid song created by Little Steven is another highlight of the night. “I, I, I, I, I, I ain’t gonna play sun city.” Everyone is singing along with the political activist as he rocks the stage.

The night closes with Out of the Darkness and the band line up to the edge of the crowd as everyone applauds the greatness of Little Steven and the Disciples of Soul. Everyone leaves to go home after a night to remember with the sound of drunk men singing Ride the Night Away. What a night! Hopefully it won’t be too long until they’re back on Australian shores.